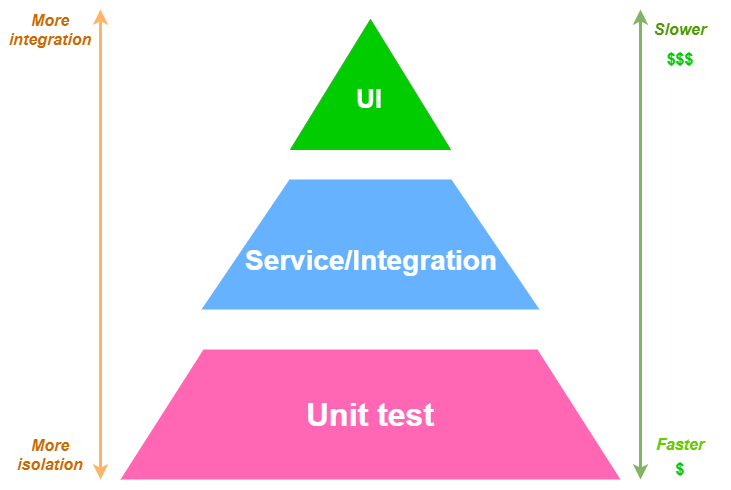 Hi, I’m Minh Khoi, a front-end developer at AnyMind Group. In this article, I’m going to introduce to you what is a test pyramid in a software product, and to be more specific: a front-end project.

The problem in software testing

In my experience, automation tests provide the facility to record/run a series of interactions with the application and check the expected result or just simply input and output of a function. Those tests work well initially. It’s easy to write, execute but costly to maintain especially in an early stage or in a fast-growing project.

Some argue that testing is costly, redundant in a(n) early birth/fast-growing project. Because an enhancement to the system or a requirement change can easily end up breaking lots of such tests and it will slow down development progress, and you should focus more on manual testing, hire a good QA team instead of writing a bunch of automation tests.

And even in a released application, testing is costly when it comes to refactoring, optimizing the old code. Each change could lead to series of fail tests.

So I agree with that, testing is costly but it’s not redundant and in my humble opinion, a good developer should able to write a testable code and should test their code before send it to the QA. This is why the Pyramid in testing is good to know when we develop an application.

The Pyramid in testing

The test pyramid is a way of thinking about how different kinds of (automated) tests should be used to create a balanced portfolio. Its essential point is that you should have many more low-level UnitTests than high level BroadStackTests running through a GUI.

The test pyramid consists of three layers that your test suite should consist of (bottom to top):

Note: Modern web applications using single page application frameworks (React, Vue, Angular) often come with their own tools and helpers that allow you to perform the interaction between components in your application and with the collaborators in a pretty low-level manner. Therefore the line between unit test and integration test is kind of blur nowadays. Even with vanilla javascript, you can use tools like Jasmine, Mocha, or my favorite of all – Jest to test your application both unit tests and integration tests.

Base on the pyramid, you could easily spot some important things from it.

Note: In my experience, if you get a failure in a high-level test, this likely means you have a bug in your functional code, which also means you have a missing or incorrect unit test. Therefore, after fixing that bug, you should replicate the bug with a unit test and a unit test will ensure the bug will be found if it ever happens again.

That’s it! I hope that there’s something useful in this article. Now go ahead and prioritize testing in your application’s test cycle. This is will pay off some days.

And remember: Eliminate bugs will save your company’s reputation.